The issue of extending utility services from the City of Calgary to the Tsuu T’ina reserve has long been a key yet subtle part of ring road negotiations. While on paper these issues have rarely been explicitly linked, they both play a large role in the relationship between these two governments.

This past week the City of Calgary and the Tsuu T’ina have finalized an arrangement that will see the Nation’s Grey Eagle Casino, including the new hotel and concert venue expansion pictured above, connected to the City’s water and sewer infrastructure. Although not explicitly related to the issue of the ring road, this new agreement can be seen to be the latest step in a long story that is nonetheless interwoven with the fate of the road.

Water and the Military

The earliest instance of City utilities servicing the Tsuu T’ina reserve did not, in many ways, actually service the Tsuu T’ina. In 1915 the Canadian Military established a training camp on the North East corner of the reserve, known as the Sarcee Camp and later as the Harvey Barracks, at which time the City’s water supply was extended to the camp. The Calgary Daily Herald reported in 1915 that “The camp will be a model of scientific and hygienic principles. Everything will be done to prevent an outbreak of disease and the Calgary water supply will be tapped…”. Interestingly, the previous year the City was in discussions to purchase part of this land for a City park. The Federal government had asked for services to be extended to the property should the City successfully purchase the land. That sale did not happen, and services to the reserve had to wait another year.

While services had been extended to the military camp on the reserve, it was for the exclusive use of the tenants, and not Tsuu T’ina members themselves. In the mid 1950s, following the outright purchase of this land by the military, there was a push to construct a permanent facility, requiring more extensive utility service. In 1956 the barracks land was annexed by the City, and for the first time a storm sewer facility was surveyed for the site. 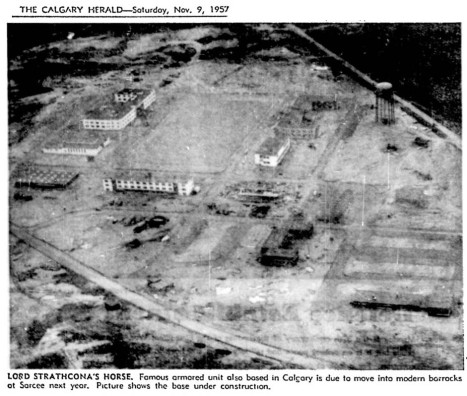 Utilities and the road

The connection between the ring road and utility service would only begin to be apparent in the mid 1970s, when the City began to develop more substantial plans for the road. In studying the road’s location for the 1977 Sarcee Trail Extension South Route Location Study, the City showed little appetite to grant access to reserve lands. Access to the Tsuu T’ina reserve was shown only at the existing point at Anderson road, but not at any other point along the proposed extension. This was in part connected to issues relating to utilities.

The ability to leverage access from the road for the benefit of the Nation would later be seen as a key motivator for the Nation to agree to have the road run through their lands. Potential commercial and retail developments built by the Nation would depend not only on access from the road, but also on service from City of Calgary utilities. While these needs would become a critical requirement for the Nation’s willingness to consider such a deal, the City was resistant to allow the Tsuu T’ina to develop along the proposed road. It was clearly a concern that extending services to the Nation would harm the City in terms of infrastructure costs, as well as facilitating non-conforming (to the City at least) developments and potentially a loss of tax revenue.

Then-Mayor Rod Sykes was initially in favour of granting access and utilities to the Tsuu T’ina, and was content for developments to occur near the road. However, this position would change to align with the position of City administrators of the time; a position made clear decades later. In 2002 Sykes wrote an opinion piece in the Calgary Herald regarding his view that a road would never be built through te reserve. His article stated in part: “What the City administration saw then was a satellite city on our western boundary, living off our services without being subject to our standards. No kind of agreement could overcome the conflicts that would flow from subsidizing such development… Calgary would have to pay for the capacity needed to service development on Tsuu T’ina lands without any hope of recovering the costs. It didn’t make sense then. It doesn’t make sense now.”

In short: the City was unwilling to service adjacent developments on the reserve, while at the same time, the Nation made it clear that without the ability to develop, there would be no land deal. The issue of utilities seemed to lie at the very heart of the issue. Though a later study co-produced by the City would endorse Tsuu T’ina development in conjunction with the SW ring road, negotiations along these lines would not come to fruition for many years.

A deal is reached

In 1988 the City and the Tsuu T’ina looked to be ready to engage in negotiations on a number of topics, including both the ring road and utility service. In addition to stating their willingness to engage in negotiations for land required for a ring road, the Nation was looking to build sewer lines to the boundary of the reserve where they wanted to tie into the City’s infrastructure. The utilities were required in order to service the administration buildings, and potentially housing, near Anderson road. If a deal could not be reached, the Nation stated that they would be forced to build sewage aeration ponds alongside 37th street, in close proximity to Calgary communities. Chief Clifford Big Plume stated at the time “I don’t think residents would like lagoons right there.” While nothing came of the call for service at that time, before long the City would again be in talks regarding the servicing of this land.

In 1992 the Nation, under the leadership of Chief Roy Whitney, had begun to develop plans for the construction of a business park and golf course near the entrance to the reserve at Anderson road. The Nation could no longer rely on trucked in water or wells to service the proposed 78,000 square-foot commercial and office complex, and a deal was again sought to secure utilities from the City, which would be in addition to the limited water and sewer servicing that the City had already extended to the Tsuu T’ina’s sports complex. The media at the time reported that the City agreed to service  the development in exchange for the Nation’s willingness to enter into negotiation for the land required for the ring road, though on paper there is no explicit link between the two issues. Contracts with the City were signed in October of 1992 for a 20 year term to supply water and sewer services to the new development, though service to the former Harvey Barracks land, where the Grey Eagle Casino now resides, was specifically excluded.

For decades, the Tsuu T’ina had envisioned commercial development on the site of the former Harvey Barracks. By the turn of the millenium, the Nation again looked to the City to be able to provide the water and sewer connections needed to sustain a large-scale development.

In planning for the new Grey Eagle Casino, the Tsuu T’ina had approached the City of Calgary regarding the provisions of utility services. Despite offering to pay for the necessary improvements to the water and sewer infrastructure, the Nation was met with resistance. The City advised that in order to consider extending utilities to the casino, two agreements would need to be undertaken. The first would be the actual terms of a contract for the provision of service, while the other was to be an agreement regarding the existing utility infrastructure that was already under the former Harvey Barracks lands. When the military transfered the Harvey Bararcks back to the Nation, the land already contained a major sanitary trunk line and storm sewer line that were integral to the City’s system. It seems that the transfer of the land did not address this infrastructure, and in seeking the new agreement the City was attempting to formalise the status of these lines, and to guarantee that the City would have access to them for maintenance and operational reasons.

These agreements were not made and the City refused to extend utility service to the casino project, however the Tsuu T’ina were prepared to develop the project without connection to the City’s water and sewer lines. Having decided to build a private, stand-alone water treatment plant in order to deal with sewage from the casino, in 2007 the Nation installed a Siemens wastewater treatment plant, which was said to ‘easily (meet) the casino’s stringent effluent requirements.’ Though it met the requirements of the existing casino, it is unclear if the existing plant would meet the needs of expanding developments.

In September of 2012, the Tsuu T’ina announced an expansion of the Grey Eagle Casino, including a hotel with conference facilities, an expanded gaming floor and a 2000-seat concert venue. At the same time, Calgary Mayor Naheed Nenshi also made an announcement; that the City and the Tsuu T’ina were already engaged in discussions regarding the servicing of these expansions. In stating “They are, after all, our neighbours right on our border and it’s important for us to work together to do things that are better for both communities and I hope that this project will be good for everyone.” Mayor Nenshi was espousing the value of engaging with a long-overlooked issue that has the ability to build bridges between the two communities.

On June 12 2013 a newly finalized utility services agreement between the City and the Nation was officially announced at a Tsuu T’ina citizen’s meeting. The next day, construction work began just west of 37th street SW to begin to install new water and sewer lines to the casino. This work marks a significant milestone in utility servicing that dates back nearly 40 years has begun.

The City’s initial reluctance to facilitate Tsuu T’ina developments adjacent to the ring road by providing utility service has, it seems, done a complete 180˚ turn. The City once operated on the idea that it could get what it needed from a ring road land deal without offering the same in return to the Nation. The City has adjusted it’s expectations, and in doing so the City and the Nation are now seemingly better connected than ever, both physically and metaphorically.

While the link between the ring road and the provision of City utilities has changed over the years, the Nation’s ability to develop their land, enabled in no small part by being connected to City utilities, has been key to providing the impetus to enter into negotiations at all. With ring road talks again underway and with new bridges being built, this new sense of connection between the Nation and the City will hopefully bring benefits to all involved.

With thanks to Amy Lonsberry and Russ Nunn.

4 thoughts on “Water, Sewer and Roads” 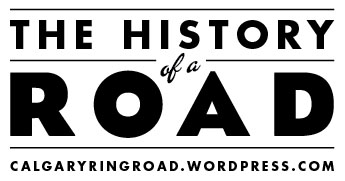