Mountain View Partners have been selected to begin initial work on the Southwest Calgary Ring Road project under an interim agreement. While the full contract will not be entered into until September 13, this interim agreement will allow work to begin along the road corridor, including the relocation of utilities. The Alberta Government expects to see crews and equipment on the project site by mid-July.

Mountain View Partners is a consortium consisting of:

The following maps were released to the public in October of 2015 by the Province of Alberta, and rather than relying on older or historical maps of the project, I wanted to ensure that the most up-to-date information was available to readers. These are likely to remain the most current views of the road until a contractor is selected in September of this year.

From North to South, the following maps show the full route of the Southwest Calgary Ring Road project as it currently stands:

1) While not part of the Southwest Calgary Ring Road, Highway 8 from Lott Creek Boulevard to the Calgary City Limits at 101st Street SW will be twinned as part of the project, including a new bridge over the Elbow river. 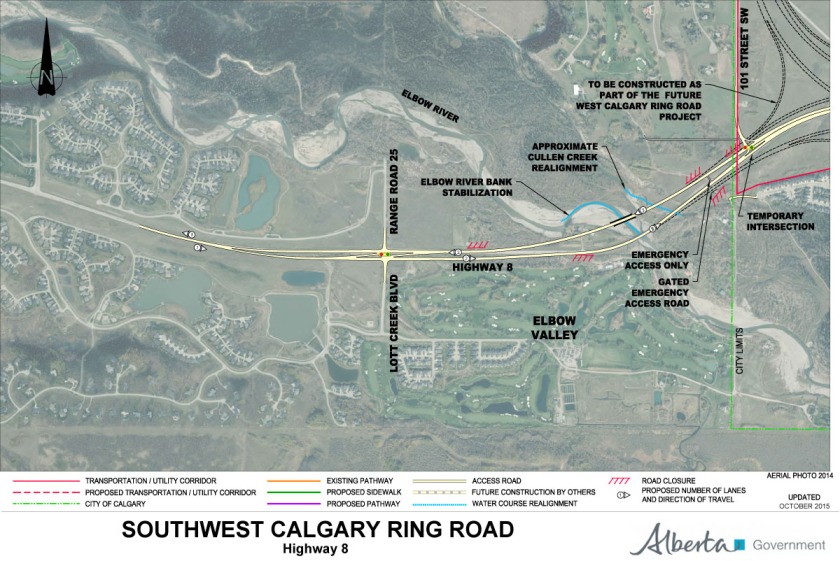 2) The Southwest Ring Road begins at the Highway 8 Corridor, from Calgary City Limits at 101st Street SW, to the interchange at 69th Street SW. 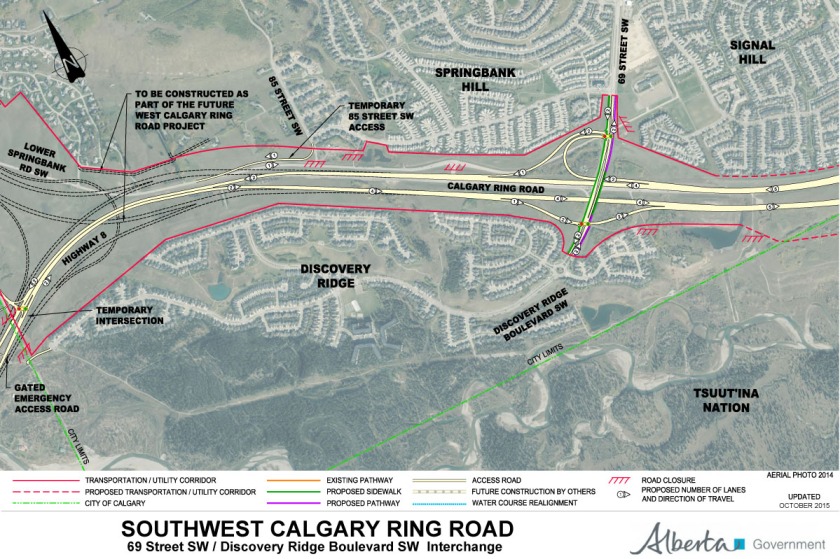 END_OF_DOCUMENT_TOKEN_TO_BE_REPLACED

Update July 8 2016: The Alberta Government have entered into an interim agreement with Mountain View Partners to begin initial work on the Southwest Calgary Ring Road project. Click here for more.

The Government of Alberta has shortlisted three consortia to bid on the Southwest Calgary Ring Road project, following the completion of the Request for Qualification (RFQ) process in August. Five groups in total responded to the request, with Mountain View Partners, Southwest Connect and Valley Link Partners having been selected.1

The Province is proceeding with the Southwest Calgary Ring Road as a 30-year Design-Build-Finance-Operate P3 (Public/Private Partnership) project, and is anticipating to contribute partial funding of between 50%-70% of the capital cost of the project.2 The selected groups will now submit proposals for the project in a Request for Proposal (RFP) process that should last about nine months.3

Representatives of Alberta Transportation have indicated that the contract for the Southwest Calgary Ring Road project is to be awarded in the first week of September 2016.

END_OF_DOCUMENT_TOKEN_TO_BE_REPLACED

At the announcement, also attended by Tsuut’ina Chief Roy Whitney-Onespot, Kenney detailed a commitment of $582.9 million, which represents one quarter of the estimated $2.8 billion cost for construction of this leg of the road. The funds are being earmarked from the National Infrastructure Component of the New Building Canada Fund, which ‘provides funding for projects of national significance’1.

(Map showing the newly revised route of the Southwest ring road; from Macleod trail in the south, to west of 101st street SW in the west.)

END_OF_DOCUMENT_TOKEN_TO_BE_REPLACED

This month, the Government of Alberta revised the plans for the Southwest Calgary Ring Road Project by extending the western portion of the road into the Highway 8 corridor. This section of the ring road, what is currently Highway 8 from Sarcee trail to just west of the Calgary city limits and highlighted below in blue, had until recently been a part of the West Calgary Ring Road Project. This change shifts approximately 5km of roadway to the Southwest ring road, adds one additional interchange (69th street SW) and a new crossing over the Elbow River to the project, while removing the same from the West leg of the road.1

This section of Highway 8, between Sarcee trail and 101st street, has played an important role in the history of the ring road, not only recently, but for many years before.

The modern Highway 8 partially follows the route of one of the oldest roads on Calgary’s west side. Richmond road, first known as South Morley Trail, was a key trail west of the city in the 19th century, and originally connected Calgary to the Stoney Nakoda First Nation Reserve via Springbank.3 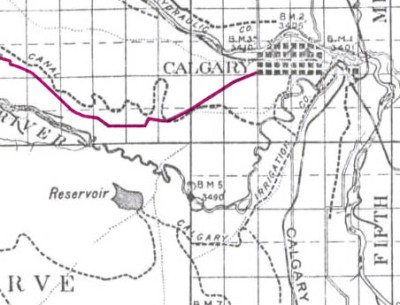 On May 1 2015 the Privy Council of Canada passed order 2015-0556, which authorizes the transfer of the proposed Southwest Ring Road corridor to the Province of Alberta. The same day, the Council passed a separate order, 2015-0557, which adds and incorporates former Alberta Crown lands into the Tsuut’ina reserve. With these two documents the land acquisition required for the Southwest Calgary Ring Road is approved.

The Province transferred $275,000,000 to the federal government in April of this year. The payment for the land will only be forwarded to the Tsuut’ina Nation, and the land title will only be assigned to the Province, once the Federal Minister of Aboriginal Affairs and Northern Development Canada signs off on the transfer.

The 2013 referendum of Tsuut’ina members, and the subsequent ratification of the agreement, meant that the Nation approved the sale and exchange of lands in order for the Province to acquire the corridor needed to build the Southwest Calgary Ring Road. Over the past 18 months, both the Province and the Nation have worked to fulfill their obligations under the agreement, in order to ensure that the land transfers would be approved by the Federal Government. Once the transfer has been enacted, which provincial representatives expect soon, the Province will have seven years in which to construct the road.

The commitment to construct the road was recently reaffirmed by former Premier Jim Prentice in the Progressive Conservative’s 2015 Provincial Budget, with construction of this leg of the ring road planned to begin as early as 2016. Though a new government is now in place, a finalized transfer of the corridor will oblige the Province to construct the road as agreed, or face the loss of the land and the money already paid.

Premier-designate Rachel Notley did not take a definitive stance on the Calgary Ring Road in the course of the 2015 election campaign, though she is quoted in relation to the ring road project as saying “In principle we are adopting the capital funding envelope and the vast majority of the commitments that the [Progressive] Conservatives have already adopted so you’d see us being in line with what’s already in the budget.” (Calgary Herald, April 29 2015, ‘Wildrose Leader Brian Jean promises to finish Calgary ring road by 2021′)

END_OF_DOCUMENT_TOKEN_TO_BE_REPLACED 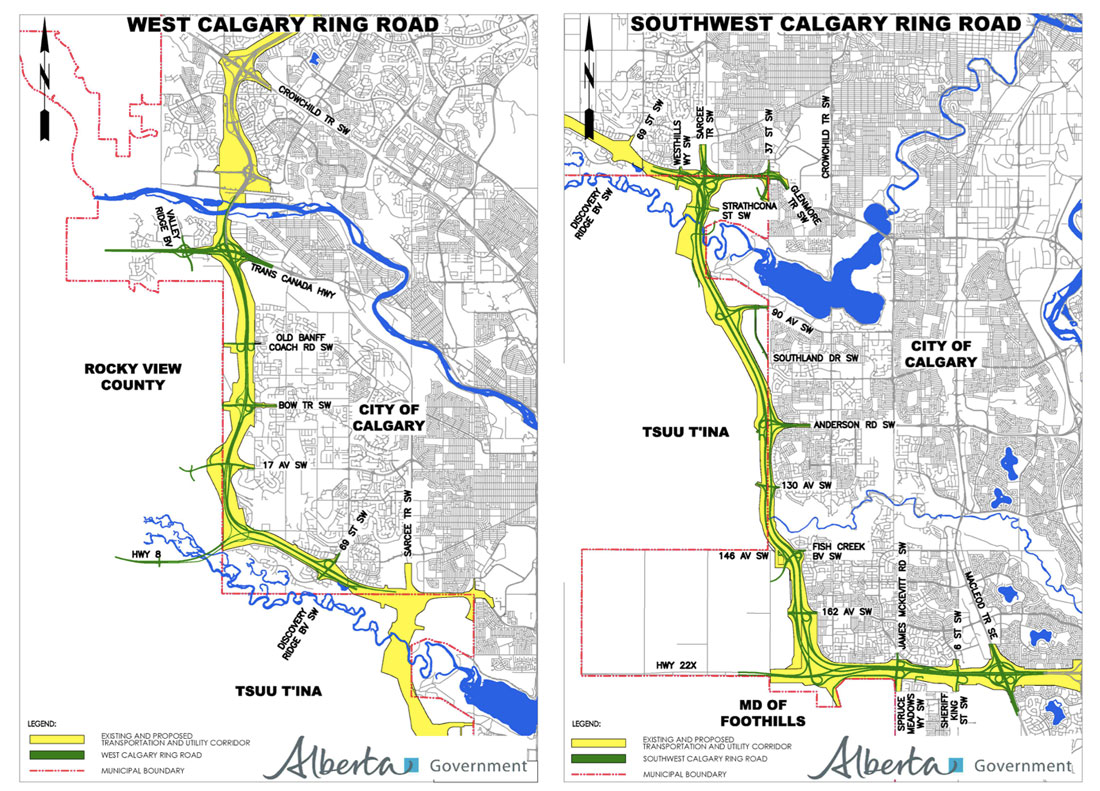 Yesterday the Alberta government announced details of the proposed budget for 2015, which includes information about the two remaining portions of the Calgary Ring Road. As a cost-cutting measure, the West Calgary Ring Road is being delayed by four years, and construction is now slated to begin in 2020/2021. Expected completion of this leg, and ultimately the entire ring road, will not occur until 2024/2025, and the measure is expected to defer a reported $1.5 billion from the current budget time-frame.

The Southwest Calgary Ring Road, the portion that runs through the Tsuut’ina Nation reserve, remains unaffected. Work will begin on this leg of the road once the Tsuut’ina land transfer has been approved and once a contract has been tendered and awarded, with construction expected to begin next year. The agreement signed between the Nation and the Province in 2013 commits the Province to open the Southwest portion of the road within 7 years of the land transfer, and the opening is estimated to occur in 2020. The 2015 budget allocates $2.9 billion over the next 5 years towards the construction of Alberta’s ring roads. This figure includes funds needed to complete Edmonton’s Anthony Henday Drive as well as beginning work on the Southwest Calgary Ring Road (interestingly referred to as ‘Southwest Stoney Trail’ in the Province’s 5-year Capital Plan despite a promised name change as the road crosses through former Tsuut’ina reserve lands).