KGL Constructors, the subcontractor responsible for the design and construction of the Southwest Calgary Ring Road, will be leading three open house sessions this month. Representatives from KGL, Alberta Transportation, and the City of Calgary will be on hand to present information about the project, and to answer questions about the progress and schedule of construction. 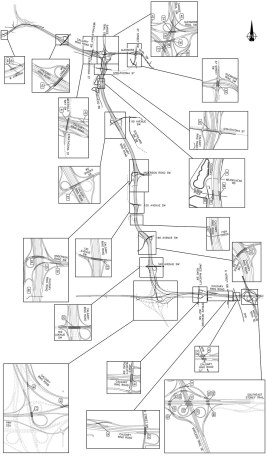 Mountain View Partners have been selected to begin initial work on the Southwest Calgary Ring Road project under an interim agreement. While the full contract will not be entered into until September 13, this interim agreement will allow work to begin along the road corridor, including the relocation of utilities. The Alberta Government expects to see crews and equipment on the project site by mid-July.

Mountain View Partners is a consortium consisting of:

Update July 8 2016: The Alberta Government have entered into an interim agreement with Mountain View Partners to begin initial work on the Southwest Calgary Ring Road project. Click here for more.

The Government of Alberta has shortlisted three consortia to bid on the Southwest Calgary Ring Road project, following the completion of the Request for Qualification (RFQ) process in August. Five groups in total responded to the request, with Mountain View Partners, Southwest Connect and Valley Link Partners having been selected.1

The Province is proceeding with the Southwest Calgary Ring Road as a 30-year Design-Build-Finance-Operate P3 (Public/Private Partnership) project, and is anticipating to contribute partial funding of between 50%-70% of the capital cost of the project.2 The selected groups will now submit proposals for the project in a Request for Proposal (RFP) process that should last about nine months.3

Representatives of Alberta Transportation have indicated that the contract for the Southwest Calgary Ring Road project is to be awarded in the first week of September 2016.

END_OF_DOCUMENT_TOKEN_TO_BE_REPLACED

This month, the Government of Alberta revised the plans for the Southwest Calgary Ring Road Project by extending the western portion of the road into the Highway 8 corridor. This section of the ring road, what is currently Highway 8 from Sarcee trail to just west of the Calgary city limits and highlighted below in blue, had until recently been a part of the West Calgary Ring Road Project. This change shifts approximately 5km of roadway to the Southwest ring road, adds one additional interchange (69th street SW) and a new crossing over the Elbow River to the project, while removing the same from the West leg of the road.1

This section of Highway 8, between Sarcee trail and 101st street, has played an important role in the history of the ring road, not only recently, but for many years before.

The modern Highway 8 partially follows the route of one of the oldest roads on Calgary’s west side. Richmond road, first known as South Morley Trail, was a key trail west of the city in the 19th century, and originally connected Calgary to the Stoney Nakoda First Nation Reserve via Springbank.3

In June of 2015, the City of Calgary will begin to construct some of the first tangible work on the Southwest Calgary Ring Road Project. This work will not be on the road itself, but will be related to utilities that will run under part of the project.

The City and Province of Alberta has agreed to construct a new storm sewer line to replace the existing South Richmond Storm Trunk that currently crosses a portion of the Tsuut’ina Nation reserve known as ‘the 940‘. The new line will be located entirely within the City of Calgary city limits along 37th street SW in Lakeview when completed, while the old line will be abandoned. This abandonment and replacement is not due to the functionality or suitability of the existing infrastructure, rather it is necessary due to reasons that are political and jurisdictional in nature; reasons that go back more than 60 years.

END_OF_DOCUMENT_TOKEN_TO_BE_REPLACED

The release of a ‘virtual tour’ video of the Southwest Calgary Ring Road this past week has given the public a chance to view the proposed plans for this road in a way that maps have not been able to. The detail and context provided by the video has raised concerns over the impacts the road will have on southwest Calgary, including the Elbow River, Fish Creek and the Weaselhead. The nature, size and proximity of the cut-and-fill river crossing, combined with a realignment of the rivers, appear to be at the heart of these concerns. 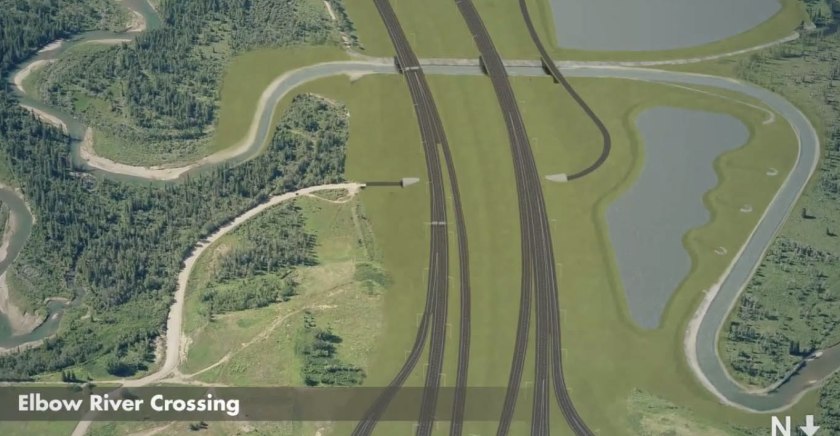 The first part of this story looks at the early proposals and the history of the crossing of the Elbow River, from the first proposal in 1956 to the project’s (temporary) cancellation in 1986. Part two, which looks at the modern river crossing plans and alternatives from 2000 to 2014, will follow.

In 1955 the Province of Alberta made public its desire to establish a bypass highway in Calgary’s southwest, and by the following year, the City had drafted initial plans for this road. Around the same time the City was also developing plans for the Glenmore Reservoir parks, and these two proposals would converge in the form of the first publicly released concept for the Southwest Ring Road, then known as the West Bypass, and its crossing of the Elbow river.

The ambitious plan for the proposed Glenmore Parks, containing an aquarium, a solarium, botanical gardens, an ‘Indian Village’ and more, was estimated to cost $3 million and would take upwards of 25 years to implement. When the City’s planning department was seeking approval from both the public and the City Council for the proposed park system surrounding the Glenmore Reservoir, they created a model of their proposed ideas. Along the western portion of the model lay the West Bypass, and its crossing of the Elbow river was presented to the public for the first time. 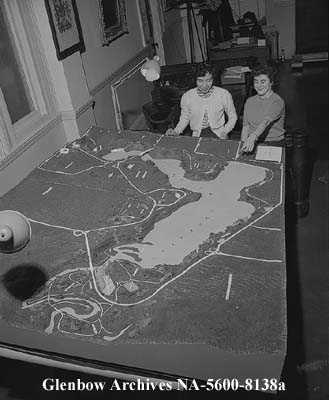 (Glenbow Archives NA-5600-8138a. Click for an enlargement of the Elbow River crossing)

The crossing, depicted as a 4-lane low-level bridge of about 180m in length with some amount of cut-and-fill on the north bank of the valley, was only conceptual at this stage. Detailed work on the entire development had yet to be carried out at the time of the model’s creation, and no engineering had gone into the designs at this point. (The road is shown along the bottom of the photograph above). END_OF_DOCUMENT_TOKEN_TO_BE_REPLACED

On August 25 2014 the Province of Alberta released 3D Virtual Tour renderings of the West and Southwest Calgary Ring Road projects.